Il Giardinotto Bed & Breakfast Welcoming apartments for your holidays in the heart of Abruzzo!

The area plays host to numerous events and characteristic festivals and fairs, in every season of the year (all information on events is kept up-to-date and is available on reception). The main events include: 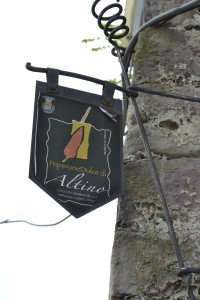 In late summer, Altino comes alive for the Altino Sweet Pepper Festival. The event takes place in the historical centre, from where you can explore the town and enjoy traditional local dishes, from appetizers to desserts, all strictly based on sweet peppers. Every town square and view point becomes a stage for tasting sessions, music, as well as wicker, wood, copper and lace workshops. The festival programme includes the “Palio delle Contrade” (Contrada Contest), a culinary challenge between the different quarters of Altino, each of which strives to come up with the most original and appetising use for this traditional vegetable. It is featured in a complete menu by each contrada to be tasted by the public, who can pay for the food using the €peperone (pepper Euro). The surroundings are filled with music, street performers, dancers and artisans for the entertainment of visitors.
The festival is organised over two days, with the announcement of the winning contrada on the final day, together with music and fireworks.
For further information: www.peperonedolcedialtino.it

The Holy week rites in the historical “cities of art” in Abruzzo are held from Palm Sunday until the Tuesday after Easter. The rites in Lanciano are organised by the town’s four confraternities. The most characteristic day is Holy Thursday: starting at 10 pm, the ritual of the Tombs (common in many towns of southern Italy) is held together with a hooded procession, an event organised by the “San Filippo Neri Archconfraternity of Death and Prayer”. The members of the confraternity, completely covered in black hoods and robes, accompany one of their members, chosen by the Prior, to represent the Cyrenean, who carries a heavy cross barefoot through the streets of the old town. The entire procession takes place in torchlight, while the notes of the funeral march are interspersed with the sound of tree frogs. 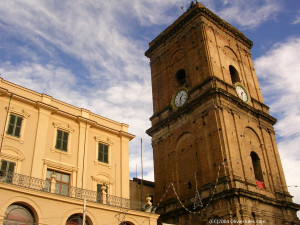 In September, Lanciano enjoys a month of celebration, marked by the following major events:

The 31 August is an ordinary day during the daytime, while at dusk, an interesting scene emerges. As if by magic, dozens of stalls appear, displaying thousands of toys of every kind and variety. While the floodlit square is crowded with children, couples flock to the trophies of large and small baskets, with bells of various sizes, made from clay and other materials, on the stalls around the square. They each buy one, choosing from thousands of colours, shapes and materials, and offer it to their sweetheart. This exchange of gifts represents a confirmation of their pledge of love.

The Mastrogiurato (first Sunday of September)

This event is organised – from the last Sunday in August to the first Sunday of September – as a week of cultural events and entertainment. It includes two medieval-style dinners, inspired by the Panarda (slow food), a medieval fair, taverns, traditional music concerts, theatrical shows, street theatre, jugglers, knights and warriors, dancers, stilt walkers, falconry and flag-throwers, culminating in an impressive historical parade on the first Sunday of September. The solemn ceremony of investiture of the Mastrogiurato (a traditional town magistrate) is celebrated on this day, with a procession involving over 700 people in period costume – from several cities in Italy and abroad – along the same route that was used in ancient times, accompanied by expert flag-throwers from all over Italy.
For further information: www.mastrogiurato.it

Every last Sunday in May, the Abruzzo wine cellars that form part of the “Movimento Turismo del Vino” (Wine Tourism Movement) open their doors to anyone who would like to taste and buy wines, as well as discover the secrets of the wineries and wine making process.
The winemakers welcome their guests to a whole world waiting to be discovered. Indeed, participation in the event has grown over the years, making it a regular and unmissable event in Abruzzo.

The International Festival of Street Art has been held in Chieti in mid-August since 2006. It is a unique event featuring various forms of street art in the beautiful surroundings of the historical centre of the Abruzzo capital.
The city is transformed into a joyful and colourful art fiesta that is not to be missed.
For further information: www.chietinstrada.it 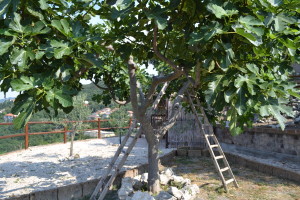 The new wine and olive oil are celebrated each year in the charming village of Treglio during the first weekends of November, when the village is festively decorated and the streets are filled with music, people and tourists for an event that has been celebrated for years.
The main participants are Abruzzo’s olive oil and wine producers, who provide the guests with opportunities to taste their new produce.
Stalls are put up outside the houses all around the town to serve traditional dishes.
In the main square, a stage is set up where musicians perform various types of music, as well as an enormous pan to ensure that everyone gets a taste of the local chestnuts.